Bluecoat Pupils Get a Buzz From Energy Firm’s Scheme 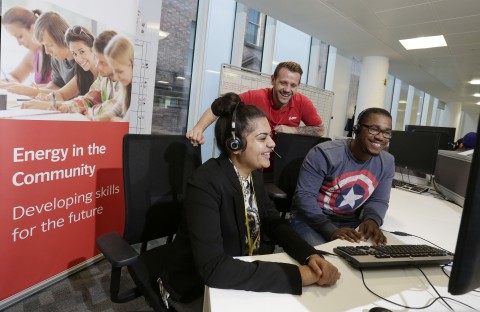 Sixth form pupils at Bluecoat Academy have been the first to take part in the firm’s new Youth Pathway scheme, which involves up to five modules and a visit to the company’s Trinity House office

Jeevan Singh Bhogal, 17, of Nuthall, was one of the 12 students to participate in E.ON’s volunteer-led Personal Brand workshop.

Jeevan, who is looking to go into an electrical engineering apprenticeship after finishing sixth form, said the course helped him to understand the importance of personal presentation.

He said: “I thought it was very useful. I learnt that your physical appearance is really important and that facial expressions can say a lot about a person.”

After the lesson in personal branding, teachers are asked to continue the programme with another two to four modules, which cover issues like working with others, confidence building and communication.

Osvany Antonio, 17, of Beechdale, said the visit to E.ON’s city centre offices was the highlight.

He added: “It was very professional and really seemed like a good working environment. I discovered a lot about the different roles, and I listened in on one of the calls.”

Ali Abbas, 17, of Aspley, said he is now considering an apprenticeship with E.ON.

He added: “The scheme has made me realise that customer service is a lot bigger than I thought it was.

“I would like to work for E.ON, there’s a good environment there.”

Alison Gibson, senior community relations officer at E.ON, said another six schools have got on board the scheme since it was launched.

She said: “The scheme is about introducing E.ON as an employer and the opportunities we provide.

“I think the students didn’t know what to expect when we walked in, but by the end of the session they seemed really appreciative and looked forward to their visit to E.ON.”

Richard Peel, head of sixth form at Bluecoat Academy, said: “It has been a great pleasure to be the first school to take part in E.ON’s new educational programme.”