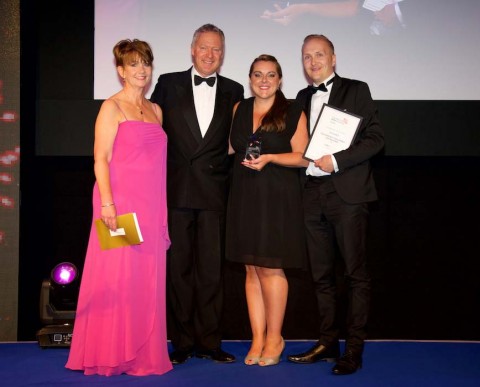 Many of the leading names in the UK power industry were on hand at the Hilton at St. George’s Park, Burton on Trent last week (Thursday 15 June 2017) for this year’s National Skills Academy for Power (NSAP) the People in Power Awards.

The Awards aim to highlight, celebrate and inform others of the breadth of talent that exists within the power industry. The event was organised by NSAP and judged by a panel of industry experts from SP Energy Networks, Siemens, SSE and National Grid. The winners – from Coventry, Essex, Hertfordshire, Glasgow, Perth, Nottingham, London and Warwick – recognised both individual and team success across eight categories.

Navdeep’s achievements and passion have inspired his colleagues since he joined the Cadent’s graduate scheme, welcoming the opportunity to make an impact on tackling climate change through the decarbonisation of gas networks. Leading on a multi-million pound government funded project, he has inspired his organisation to join his journey for a brighter future. Navdeep is proactive in promoting STEM to future generations. The judges were inspired by his passion for the sector and importance of STEM subjects, as well as his vision for a low carbon future.

The NSAP judges were extremely impressed with Zoe’s success and how she is using her new skills to further her career in the sector. Zoe had no prior engineering experience, before she successfully completed her E.ON Apprenticeship in 2016 and became the first female in the UK to achieve the Dual Fuel Smart Meter Standard. She continues to promote apprenticeships and encourage more women to join the sector. Sharing her story with various MPs and having them encourage the value of apprenticeships, her colleagues cite her as an ‘exemplary, hardworking and positive’ role model.

Richard is a highly experienced and motivated individual, who led by example as the Group Health and Safety Manager. The judges credited Richard’s innovative thinking in leading the development of a lone worker app. Since then, the development of the bespoke app has set a new health and safety benchmark for the sector – the first of its kind by a UK utility contractor. Richard showed great initiative by underlining the importance of an inclusive approach and collaborative working. The app is now an important safety tool for Morrison Utility Services operatives, providing additional safety and a greater peace of mind.

The first team award of the night was won by the Resourcing team at ScottishPower for its comprehensive strategy focused on STEM education.

The team showed commitment to ensuring the strategy continues to evolve and reflect society’s needs. It has delivered a range of education, skills and trainee programmes dedicated to inspire young people from all backgrounds to get involved with STEM. The team collaborated with partnership schools, colleges and universities, as well as supporting key campaigns and organisations, providing interactive learning and jobs and engaging with over 10,000 people in 2016.

SSE’s training team has made significant improvements to the Customer Service Induction Programme for new starters joining SSE’s General Enquiry team. More than 850 new starters have gone through the Programme. The judges remarked how the trio focused on customers, demonstrated improvements and kept trainers involved even after training had finished.

SSE focused on gender diversity in its graduate, and apprentice recruitment drives. The panel recognised SSE’s success in encouraging more females into the sector: female applicants for their Trainee Engineer Programme have increased by 79%; 40% of graduate engineers are female compared to last year’s 17%.

E.ON used #Awkward, its viral video series to promote diversity and inclusion to dispel myths around specific groups in an engaging way. The series was designed not to shy away from controversial subjects, applying a light-hearted format to appeal to all colleagues. The project team was able to locate how previous initiatives failed and worked to break the norm. The judges were impressed by the videos’ content and E.ON taking the bold move to focus on all diversity issues.

UK Power Networks, among the leading Distribution Network Operators (DNO), kept employees’ interests central to its success while working towards delivering an excellent service through engaged and motivated training. The DNO became the first UK energy company to have staff complete the Trailblazer Apprenticeship scheme.

Phil Lucock led the procurement team and worked with National Grid’s Academy to globalise training supply into a single Managed Service Provision for both the UK and US. The Academy’s ambition was to change the way National Grid delivers training services to the organisation. Twelve months into the contact, there has been a fantastic response to the MSP with the next phase moving forwards. In awarding the prize, the adjudicators felt the team proved its capability of pinpointing skills and talent already existing within the workforce, and then offering opportunity for training and development.

“The People in Power Awards was a great success,” said Nicki Hussain, Head of NSAP. “The industry came together to celebrate the strategic and operational successes across the sector, at all levels of seniority and it was really encouraging to see the businesses’ commitment to the skills agenda. The evening awards focused on the talent that is needed to help close the skills gap and I hope they will inspire others to do more. I’d like to congratulate all the finalists as the quality of entries we received was extremely high – and of course a huge congratulations to all the winners.”

The Workforce Renewal and Skills Strategy was developed by the Energy & Utilities Skills Partnership, a collective of leading sector employers that is working to ensure a safe, skilled and sustainable workforce provides the essential services that our customers seek and meets the UK’s needs from the energy and utilities infrastructure.

Image: Jacqueline Hall, EUIAS, with the winners of Training Provider of the Year Award, SSE