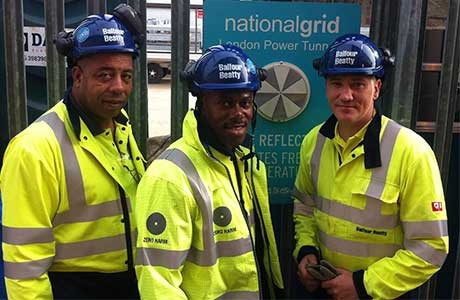 Mikey Fairweather’s last job was ferrying the likes of Sue Barker, Lynford Christie and Robbie Savage to and from the press areas at the Olympic Games. His new role might not involve brushing shoulders with the stars, but his responsibilities could now be a matter of life and death.

Mikey is one of over 20 new operatives employed by Balfour Beatty through Job Centre Plus who have recently starting work on National Grid’s London Power Tunnels project. This project will create an energy ‘superhighway’ for the capital by connecting substations via deep underground tunnels, providing more capacity for new sources of renewable energy and allowing future upgrades and maintenance to be carried out without the traditional need to dig down to cables buried beneath roads.

As a ‘Tally-Man’, Mikey is responsible for counting other employees into the tunnel to carry out the task of installing high-voltage cables, up to 3km from the nearest exit. At the end of each shift he will then ensure that they are all safely accounted for; a job which, in the event of an emergency, becomes of critical importance.

He and his colleagues have just completed over two months of training at the state-of-the-art Tunnelling and Underground Construction Academy in East London to prepare them for the work ahead. Using Balfour Beatty’s patented Tunnel Cabling Machine, they will be installing over 200km of cables onto the walls of the tunnels, a task which Mikey is relishing:

“I’m so proud to have been given this opportunity and responsibility by Balfour Beatty. To be involved in a project like this is very exciting and really surprising to a lot of my friends and family, because although Crossrail and the Underground get talked about a lot, not many people are aware of London Power Tunnels.”

Another new recruit joining Balfour Beatty and enjoying the responsibility of being a Tally-Man is Jason Fleet:

“I’d been unemployed for a couple of years after working as a painter and decorator. I saw the opportunity to train for tunnelling work advertised through the Job Centre and thought I’d give it a go. It’s fantastic being back in work and to be working for a company like Balfour Beatty.”

Easton Reid also recently started with Balfour Beatty, switching from a career in IT. He added:

“IT can be a bit of an uncertain industry, and I’d been made redundant a couple of times in the last few years. I was attracted to these roles because of the stability – we’ve got the security of a five-year contract, plus the possibility for further projects in the future. We’ve had a lot of training, allowing us to gain qualifications and competencies which will help us both in our current roles, and further on in our careers.”

“We’re delighted to be working with National Grid to provide exciting new career opportunities in London. These new employees will be working on an incredibly important project for the capital’s power supplies, and I am sure they will bring a diverse range of new insights and experiences to our operations.

“With billions of pounds due to be invested in energy networks over the next decade to ensure demand continues to be met, those starting their careers in the power sector today will have the opportunity to work on some of the most innovative and large scale infrastructure projects in the world, allowing them to continue to develop their skills and careers.

“It’s National Grid’s job to connect people to their energy supplies and London Power Tunnels is doing that in spectacular style.

“We’re delighted to welcome these new people on our team – they will play a vital part in helping to keep the lights on in London.”